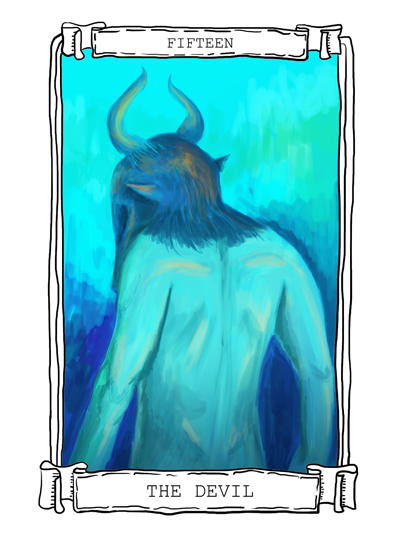 When I tried the Hecate fanart, I was inspired to make tarot cards out of Sleep No More characters. Hecate just fit The High Priestess too well.

I ran with that idea and cast the other characters.

Here is the Boy Witch as The Devil.

The end of my night was a blur.
Here were some of the more lucid moments…

Most Suspenseful :
Everyone held their breath as Malcom lathered up Duncan for a shave…perhaps the closest he ever gave…

Most Aha!-I’ve-Seen-A-Photo-of-This! :
Mad Lady Macbeth sat in a bathtub, after being undressed by the nurse. 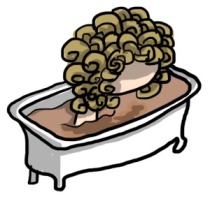 Most Rapid Transition from Adorable to Unsettling :
The taxidermist stitched close a teddy bear (aww) and laid it in a crib surrounded by headless dolls (creepy!).

Most Spoiled by the Theater Program:

Most Awkward:
I met scorchedthesnake. Instead of striking up a normal conversation, I tapped him on the shoulder, gave him a coin, and ran away. I’m not usually this awkward in real life, I promise! 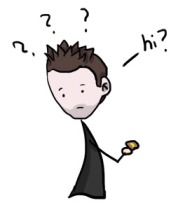 Most Celebrity-like:
“Come quick! Look at her dress!” One of the coat checkers called to the other, before handing me my coat. Frequent revisitors probably got greetings all the time, but I felt super special.

My second Sleep No More experience was SPECTACULAR!
I had an amazing time bombarded by all sorts of surprises.
It was a significant improvement on my first trip.

Now the question is…should I go back?

A glimpse of a speeding man sent me dashing after him, only to catch dust.

Lost among the shadows, I eventually encountered Malcom, Banquo, and Macduff processing with the dead Ducan. It was a somber moment when I bore sole witness to his funeral. 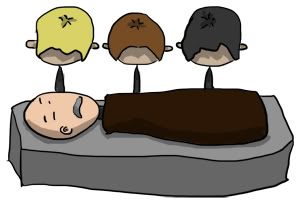 The trio later reconvened at the speakeasy.
Beneath shady lighting, they dealt out cards and responsibilities.
After a few rounds of games and alcohol, they hammered the nail into Macbeth’s coffin. 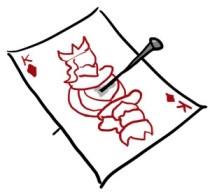 Right after Malcom and Macduff had slipped away, Macbeth stormed in, and lunged after Banquo.
The two entwined in a brawl.

This fight was not a delicate dance.
It was savage and brutal!

After being tossed all over the speakeasy, Macbeth finally corned the fallen Banquo behind bar, and struck repeatedly with bone-breaking ferocity. 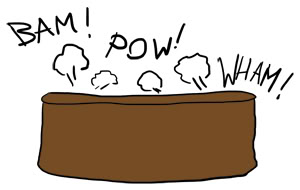 Finally, a silence came over the room.

The bloodied Macbeth staggered away as the speakeasy bartender rested a brick on the pool table.

Banquo was no more.

Just as I was gathering my wits, a guest next to me whispered:

Sleep No More is the best show ever! It’s immersive entertainment based on Shakespeare’s Macbeth. You start off checking in at the McKittrick Hotel, and then explore five floors of gorgeous film noir setting.

You meet stunning characters, and watch how their actions intertwine.

I saw Sleep No More in January and raved it to everyone. It was unbelievably awesome!

One of my friends was intrigued and went to go see it yesterday. We compared stories today.

I’d missed so much! For me, I arrived late to the show and had to leave early, so I rushed. I only caught glimpses of crucial scenes!

No spoilers in this post, but I’ll put up a summary of my and my friend’s experience after the show’s run is over.

Right now, I’m super inspired by Sleep No More. My next few projects will be heavy on this theme.