Last night, I went to the to the Dragons of Tarkir midnight prerelease at the Twenty Sided Store, and had an AWESOME time.

Twenty Sided Store is an especially friendly local game store (they have a great code of conduct) and they were even featured on a NPR’s Planet Money podcast! If you haven’t listened to it, check out “Episode 609: The Curse of the Black Lotus.”

I met a lot of very friendly people and we supported each other throughout the night. One even gave me a pack of sleeves!

It was the first time I played with sleeves, so I felt super legit. 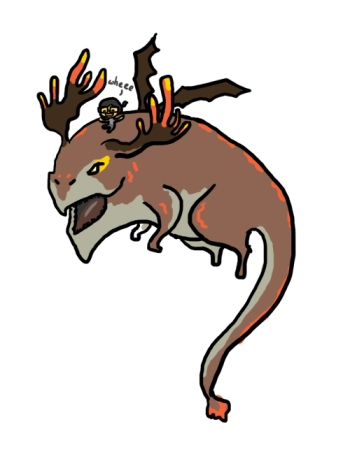 Dragonlord Atarka led my deck. She and her brood powered me to a 3-0 victory (my very first one).

Every time she landed on the battlefield, she was devastating.

Here’s some highlights of the night:

My Harbinger of the Hunt was a powerhouse. When it was encased in ice, it still roasted enemies left and right. When flying free, it even killed off a Sunscorch Regent!

Slickest move of the night was when I played Guardian Shield-Bearer to get Illusory Gains off my Stampeding Elk Herd.