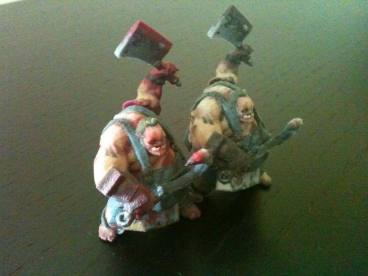 I 3D printed one Pudge, a DOTA2 video game character, from Shapeways and another from Sculpteo.

What came out was excitedly surprising.

The Shapeways version was a lot more red/blue in tone and the Sculpteo version was more orange/brown. I’d assumed Shapeways and Sculpteo used the same ZCorp printers to print, but maybe they calibrate it differently.

I’m not sure which one is ‘more’ correct, but I like the Shapeways one better. The color contrast shows up better, and it’s just a tad less grainy.

I think the color biases between the two Pudges are kind of neat. I’ll keep this information in mind the next time I choose a printing service.